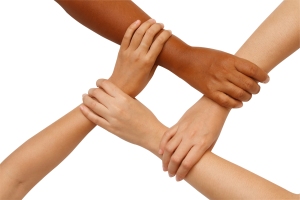 Crystal Blanton is one of my favorite Pagans. She has been a tireless activist voice within the Pagan community and beyond it. Her focus has been speaking up for those marginalized by society at large, primarily focusing on People of Color, but also focusing on issues around class, gender, and sexuality.

Recently there have been several high-profile cases of unarmed Black men being killed by police officers, and despite the fact that there was evidence that the Black men were not resisting, or evidence (including video in some cases) that the police were using excessive or inappropriate force, the police officers were not charged with murder.

What does this have to do with Pagans? The issue is that Paganism is a minority religion. We’re used to being persecuted, and many Pagans jump at the chance to defend other Pagans from being unfairly treated. The Pagan community has long been a refuge for other minorities, such as GLBTQ community members. Yet, in a recent Facebook post, Crystal spoke up about the silence of Pagan organizations on issues of race. And that silence is something that is worth speaking about.

Crystal Blanton:
I am noticing… again… the silence of the Pagan organizations in light of the recent unrest, death of unarmed black men, injustices, protests, and harm within society. As a POC Pagan, I am looking out into my community and I do not see the community standing up for me.

This is an opportunity to stand up and support the people of color within the Pagan community, and society, by saying… we see you. We are not ignoring you, we are not staying silent.

When the Pagan community does not stand up to support the POC members within their community that are hurting, it is an “in your face” way of reminding us that we are not welcomed.

An African Zulu greeting “Sawubona” translates to mean… I see you. More than the normal seeing…. seeing the core, our humanity, our spirit, our worth… our souls.

So tonight I am saying to the Pagan community, I see you….. the question is… do you SEE us?

I thought I’d offer some context about where I stand on this. First, I’m not the leader of any large organization, so I’m not in much of a position to release a formal statement to any non-Pagan group. Or at least, not one that carries any weight with the media. However, I do have a voice within the Pagan community.

My activism has, in the past, primarily focused on environmentalism. And then transgender activism, and GLB activism, within the Pagan community. And then I became an activist for consent culture (vs. rape culture) as well as an activist speaking out about issues of abuse and rape.

Where I’ve tried to be an activist for People of Color, as well as other minorities, is through using my voice to begin to speak to the issue of privilege. I feel that that is a key step in this whole process.

Privilege
I use myself as an example; I’m white, heterosexual, cisgender, and female. I grew up thinking I was incredibly poor–and by comparison to my classmates, I was. I grew up in an all-white town thinking that racism was over, never realizing how many racist attitudes I was raised with. Several years ago I was (very harshly) privilege checked. The way it was done, it pissed me off and I had a bad reaction to the P-word for years. It wasn’t until talking to Crystal, and attending part of the first Pantheacon discussion on privilege that I really understood it.

A lot of my activism around privilege is practically one-on-one. I post conversations on my FB, write blogs, and I hope to introduce the concept of privilege in a way that is more accessible than how it was thrown at me the first time.

Why do I bother?

Because for me, once I understood privilege, I understood that we don’t actually live in a color blind society. I’m often appalled at my own racist assumptions. And these are just autopilot things that I never even considered; it’s just what people did and said around me when I grew up. “Lock your car door when you’re around Black people.” And, “It’s not racist if it’s true.” And dozens of other things.

By understanding my own privilege, I understood a lot more about racism, and it’s made me a better ally.

My activism is usually twofold. One is, I work to live my own life in a way that is in accordance with my values. I reduce what I use and try to live more sustainably. I’m an advocate for consent culture so I shift my behavior to support that.

The other is that I speak out. Again, my platform is typically within the Pagan community, so I speak out about environmentalism and ways we can change our behavior as a community to be more environmentally sustainable. I speak out about how heteronormative rituals aren’t inclusive of gay, lesbian, and bisexual community members. I speak out against the discrimination against transgender community members. I talk about sex and abuse and consent and rape. I hope to expose people to these concepts so that, even if just within the Pagan community, we can begin to make those changes.

And I also write about privilege because I find that once people can see the perspective on their own privilege, they begin to see how the system harms those at the bottom. People of Color, GLBTQ, Pagans, the poor…there are so many who suffer because the system treats them differently. But we can’t really effectively help, or change the system, until we first SEE the system, and acknowledge our own place in it.

And many, many people try to argue with me that they didn’t come from privilege, and they perpetuate the “American Dream” myth that anybody, regardless of class or background or ethnicity or skin color, can pull themselves up by their boot straps if they try hard enough.

As long as we hold up that myth, we are supporting the system that murders unarmed black people.

Being an ally first means acknowledging the system. And then, working to change it, even if all you are doing is speaking up to confront racism in others. You don’t have to join a protest with a sign to be an ally. But, I also acknowledge that it can be difficult to navigate how to best help as an ally.

How Can I Help?
There are ways I already speak out, but I acknowledge that there’s more I can do. Speaking for myself, I don’t always know how I can help. I’ll be more specific. As I said earlier, I’m white, I grew up in a pretty much all-white town. I’ve slowly been learning how many microaggressions I’ve committed against People of Color (check Wikipedia or Google if you want to understand microaggressions) and I’ve worked to correct that behavior.

But I don’t always know how I can best serve as an ally or activist for People of Color. I can work to wake people up to the concept of privilege…but how can I impact the larger system? How can I help?

Going further, how can I help in a way that respects Black and brown voices and doesn’t seek to put my voice above theirs?

I know that many don’t consider themselves to be activists at all. And I’ve heard with some frequency from other white Pagans that they, also, feel at a loss for how to help. What I’d love to do is begin to gather together some concrete actions that Pagans can take to combat racism.

I feel that the first step is for all of us–all of us–to acknowledge our own racism and classism. Our own privilege. Our own discrimination against minorities. Let me tell you, I was a little horrified once I realized how many racist assumptions were just ambient noise in my head. And I’ll be clear–these are things I learned from teachers, classmates, family, television.

Once I began to recognize my own racism and discrimination, I had the tools to begin to take it apart piece by piece.

Concrete Actions
What I’d like to do is put out some information–probably in the form of blog posts–about what are things that people (Pagans) can do to combat racism. And for that, I’d like your help. I’d love to pull together a list of specific, concrete things that people can do to help. Personally confronting our own privilege and racism is a start. And talking to others about racism (and checking others on racist comments) is another. Asking larger Pagan organizations with a media presence to speak out is yet another.

But what else will really help?

I’ve found that running Pagan events is very similar to activism work. When I’m running an event and I post on Facebook or in email and just vaguely ask for help, that usually gets very few results. What works better is asking people, “Will you help? Here are five concrete things that you can do that would help me.” That gets a lot better response.

In fact, in an activism workshop I was in years ago, there’s an entire category of activism that isn’t at all about being out on the streets with the signs–it’s the person who’s good at strategizing those 5 things that people can do, and coordinating the helpers.

Posting on Facebook is potentially a way to shift people’s thoughts and ideas. And I’ll keep posting on privilege because I know I get through to a few people every time I do and build the pool of allies. But I’d love to know what are other concrete actions that I can take that would help this cause.

If we, Pagans, want to see a world that gives us justice, we can’t sit by and watch People of Color get trampled by that same system. Let’s look at ways we can help change this system for all of us.

13 thoughts on “Pagan Response to Racism”